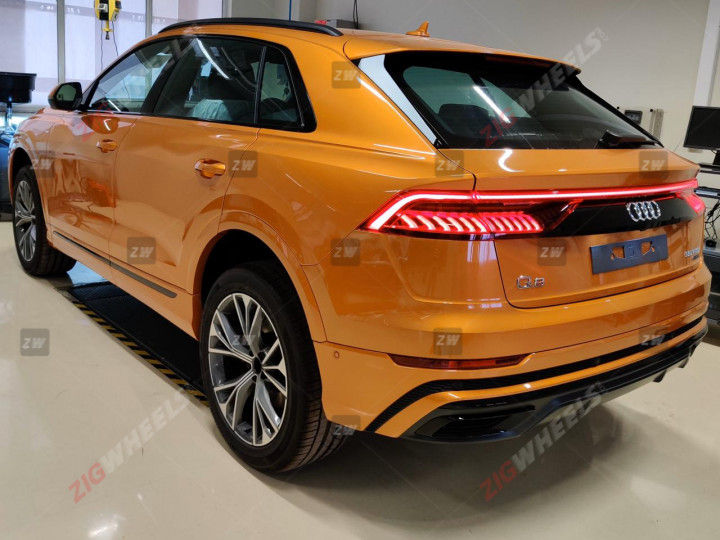 An Audi Q8 has been spied undisguised ahead of its India debut. The flagship SUV is set to be launched on January 15 and is expected to be priced around Rs 1.4 crore (ex-showroom). Bookings for the Q8 are open for a token amount of Rs 15 lakh.

The Audi Q8 seen here looks drool-worthy in this yellow paint scheme. The front end comes with a big single-piece grille flanked by sleek LED headlamps. In profile, the hunkered-down stance, large dual-tone alloy wheels, and the sloping roofline give the Q8 a sporty stance. At the rear, the SUV gets a raked tailgate that takes inspiration from the legendary Audi Quattro. Other highlights include connected tail lamps and an aggressive splitter with dual exhausts.

Under the hood, the India-spec Audi Q8 will be offered with a BS6-compliant 3.0-litre TFSI engine. It develops 340PS of power and 500Nm of torque and comes mated to an 8-speed automatic gearbox. There won’t be a Q8 TDI in India as Audi is planning to focus on petrol and electric vehicles in the BS6 era.

The Audi Q8 will be available with a plethora of customisation options. It’s expected to be available in more than 50 exterior finishes and variety of interior colour options. When launched in India, the Q8 will lock horns with BMW’s X7 and the upcoming Mercedes-Benz GLS.