The market rebounded in early trade but gave up more than half the gains by noon on January 7 as traders remained wary of developments between the US and Iran.

Benchmark indices ended off the day’s high with half a percent gains, driven by select banking & financials and Reliance Industries.

The BSE Sensex closed up 192.84 points at 40,869.47 while the Nifty 50 rose 60 points to 12,053, forming a bearish candle resembling an Insider Bar kind of pattern on daily charts as it traded within the range of the previous session but managed to hold its psychological 12,000 levels.

Experts expect the volatility to continue in coming sessions and 12,000 to act as a crucial point for directional move on either side.

“The present pullback could raise some hopes for bulls to make a comeback. But, this upside bounce could be short-lived and the Nifty is likely to reverse down in the next 1-2 sessions. Immediate resistance to be watched at 12,150 levels and crucial support is placed at 11,980,” Nagaraj Shetti, Technical Research Analyst at HDFC Securities told Moneycontrol.

The broader markets outperformed frontliners as the Nifty Midcap index gained 0.7 percent and Smallcap index rose 1.21 percent amid positive breadth. About two shares advanced for every share falling on the NSE.

“Stability in crude oil prices and currency seem to have provided temporary relief to investors. Nonetheless, geopolitical developments would still be one of the key factors on investors’ radar, as any further escalation would have an adverse impact on market and economy,” Ajit Mishra, VP – Research at Religare Broking said.

Given the current set-up, the benchmark indices are expected to be volatile in the near term, he added.

We have collated 15 data points to help you spot profitable trades:

Maximum call open interest (OI) of 27.5 lakh contracts was seen at the 12,500 strike price. It will act as a crucial resistance level in the January series.

Maximum put open interest of 42.33 lakh contracts was seen at 12,000 strike price, which will act as crucial support in the January series.

Stocks with a high delivery percentage

A high delivery percentage suggests that investors are showing interest in these stocks. 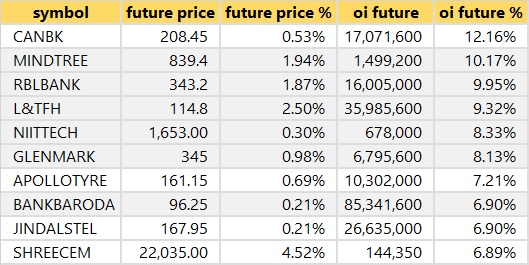 Based on open interest (OI) future percentage, here are the top 4 stocks in which long unwinding was seen.

An increase in open interest, along with a decrease in price, mostly indicates a build-up of short positions. Based on open interest (OI) future percentage, here are the top 10 stocks in which short build-up was seen.

A decrease in open interest, along with an increase in price, mostly indicates a short covering. Here are top 10 stocks that witnessed short-covering on January 7. Upcoming analyst or board meetings/briefings

Ashapura Minechem: Board meeting is scheduled on January 10 to consider the issue of approximately 45 lakh preferential warrants to the promoters.

Wipro: Company will announce its October-December quarter earnings on January 14.

Stocks in the news

NBCC India: Company got orders worth Rs 1,090 crore in December.

Bosch: Trade Unions at the company’s plants situated at Bidadi and Naganathapura in Karnataka and Jaipur in Rajasthan are participating in the All India General Strike called by Central Trade Union on January 8.

Muthoot Finance: MD, George Alexander Muthoot, was mercilessly attacked by criminals at the instance of CITU while he was on his way to the headquarters of the company at Kochi on January 7.

Pradip Overseas: Company has accepted for the execution of One-time settlement with the State Bank of India.

Suzlon Energy: Company defaulted on payment of interest/repayment of principal amount on loans from banks / financial institutions, which was Rs 7,256.38 crore.

V2 Retail: Akash Agarwal has resigned from the post of Chief Executive Officer (CEO) due to professional engagements.

ARSS Infrastructure Projects: State Bank of India has cancelled the compromise settlement due to default in making the payment.

Stock under F&O ban on NSE

Get access to India’s fastest growing financial subscriptions service Moneycontrol Pro for as little as Rs 599 for first year. Use the code “GETPRO”. Moneycontrol Pro offers you all the information you need for wealth creation including actionable investment ideas, independent research and insights & analysis For more information, check out the Moneycontrol website or mobile app.