Mehidy Hasan is the concussion substitute for Liton Das and he has come out to the middle to bat. Unfortunately Liton will no longer take part in the Test. However, Hasan will not be allowed to bowl for Bangladesh as per like-to-like replacement rule.

Ishant Sharma strikes soon after lunch. Ebadat Hossain, who came in place of injured Liton Das has been castled by Ishant Sharma with the leg cutter. The off stump goes for a spin as Ebadot walks back for 1.

Nayeem Hasan sorts of reply to barrage of bouncers from Mohammed Shami. Hits him for two boundaries in the over including one on the final ball of the over.

: Mohammed Shami showing no signs of mercy. Bouncer followed by another bouncer. Nayeem Hasan avoids this one but India pacers have rattled the Bangladeshi batsmen.

: Mohammed Shami finds the head one more time. This time Nayeem Hasan, who is struck by a vicious bouncer. Nayeem looks fine but the physio is on the field once again to check on him.

Liton Das who got hit on the head in the first session has not come out to bat. Ebadat Hossain and Nayeem Hasan resume for Bangladesh post lunch break. Ishant Sharma will bowl the remaining two balls of his incomplete over.

India dominate the first session! Their pacemen wreak havoc as Bangladesh are reduced to 73/6 at tea. Can the vis… https://t.co/8t3SLYCl1W

Playing an international match with the pink ball for the very first time didn’t seem to bother the Indian pacers much as they wreaked havoc, reducing Bangladesh to 73/6 at lunch on Day 1 of the maiden

on Indian soil at the

in Kolkata. In the presence of high profile dignitaries that came to witness the historic Test, Bangladesh won the toss and went in with the decision to bat first. But the decision backfired heavily as pace trio Umesh Yadav, Ishant Sharma and Mohammed Shami rattled the Bangladesh batting line up. Ishant got the opening breakthrough in the 7th over, removing Imrul Kayes for 4. Umesh then struck twice in his over to get rid of Mominul Haque and Mohammad Mithun. Shami too joined the party removing Mushfiqur Rahim for a 4-ball duck. Shadman Islam showed brief resistance with his 29 off 52 balls but was dismissed by Umesh. Ishant then removed Mahmudullah as Bangladesh continued their downslide before the break. For India, Umesh picked up three wickets while Ishant took two wickets. Shami chipped in with a wicket as well in the first session.

That will be Lunch on Day 1 of the #PinkBallTest. Bangladesh won the toss, but India have most certainly won the s… https://t.co/1fb6XffVY5

So, that’s the end of the proceedings for the first session on Day 1. Bangladesh really struggling at the moment.

: The Bangladesh team physio is on the field again. Liton Das was struck on the head last over from Mohammed Shami. That time he looked fine but now has has called in for the substitution. The physio is examining him.

And umpires have called for Lunch break!

Exquisite from Liton Das on that occasion . He is not giving up for now. Over-pitched delivery from Ishant Sharma and Das drives it through covers to pick up his fourth four.

Another screamer from the Indians behind the stumps. This time its Wriddhiman Saha, who takes an unbelievable one-handed diving catch. Ishant Sharma induces an outside edge off Mahmadullah’s bat and Saha was brilliant on that occasion. The ball sticks to the webbing of the glove. Mahmudullah walks back for 6. Bangladesh sink further.

: Ishant Sharma bowls a tidy comeback over. Just 2 runs from it. Spin from other end for India as Ravindra Jadeja comes into the attack for the first time.

Short and wide outside off from Umesh Yadav and Liton Das cuts it through backward point region to collect his first boundary.

This is sheer class from @y_umesh. Picks up his third wicket of the day 💪💪 Live – https://t.co/kcGiVn0lZi @Paytm… https://t.co/rruxtAEp7m

: A seven-run over from Umesh Yadav comes to an end. Bangladesh batsmen collect a boundary, a single and a couple from it.

India pacemen are enjoying bowling with the pink-ball at Eden Gardens! Mohammed Shami gets his first, and it’s the… https://t.co/szSMziEE3V

Mohammed Shami joins the party as well. Mushfiqur Rahim plays on the ball back onto his stumps. Good length delivery from Shami but it gets big on Rahim. He is not able to control the ball as it hits his middle stump. Bangladesh batsmen are struggling here at the moment.

Umesh Yadav is on fire, yet again. Has picked up two quick wickets in an over 🔥🔥 Live – https://t.co/kcGiVn0lZi… https://t.co/rx5xHWuel8

Knocked him over! Umesh Yadav this time castles Mohammad Mithun with a cracking delivery. A two-ball duck for him. The ball drats in after pitching and knocks over the stumps of Mithun. Bangladesh in big trouble early in the first innings. They are three down in no time.

Rohit Sharma takes a screamer at second slip. What a catch this his from hitman. A sensational effort from him as he dives to his left to complete a one-handed stunner. Umesh Yadav gets the outside skipper Mominul Haque and Rohit does fantastically well. Haque walks back for a 7-ball duck.

Huge caught behind appeal from India!

Umpire rules not out and India have gone for the review. An excellent take down the leg side from Wriddhiman Saha. Mohammed Shami is in action straightaway. Shadman Islam does not look worried. And the replay confirms that there was no bat involved. India lose their first review.

Change in bowling for India!

Mohammed Shami comes into the attack for the first time. He replaces Umesh Yadav.

This time Ishant Sharma traps Imrul Kayes in front. In-dipper from Ishant beats the inside edge of Kayes’ bat and hits his front pads. Huge appeal from the India players and umpire rules out. Kayes went for the review but is unsuccessful this time. Bangladesh lose early wicket. ayes departs for 4.

Imrul Kayes has gone for the review straightaway. Out-swinger from Ishant Sharma beats Kayes. There was something on the way to the keeper. And that’s why umpire has ruled him out. But replay confirms that the sound was that of the thigh pad. The on-field decision is overturned!

This time off the back foot. Short-pitched delivery from Umesh Yadav and Shadman Islam pulls the ball over the short mid-wicket fielder to collect his second boundary of the over.

First boundary of the

. Short and wide outside off from Umesh Yadav and Shadman Islam throws his bat at it. Collects four runs in the vacant deep point region.

End of 2nd over

: A tidy start from Umesh Yadav from the other end as well. Just two singles from his first over. Both Bangladesh openers Shadman Islam and Imrul Kayes are now off the mark.

: Imrul Kayes and Bangladesh get off the mark with a comfortable single towards the fine leg region off Umesh Yadav. On the pads from Umesh and Kayes guides the ball behind to collect a run.

End of 1st over

: An excellent over first up from Ishant Sharma.

A watchful start from Shadman Islam. Umesh Yadav will share the new ball with Ishant from the other end.

Shadman Islam and Imrul Kayes are out in the middle to start the Bangladesh innings. Ishant Sharma has the pink cherry in hand. He will start from around the wicket. Three slips and a gully for him. The atmosphere is electric at the Eden Gardens.

Players from both the teams are out in the middle along with the match officials for the national anthems. We are just moments away from the start.

Eden Gardens is all set for the historic pink-ball Test! Bangladesh captain Mominul Haque wins the toss and opts… https://t.co/QJTEnYqj8A

Playing XI from both the teams

Captains at the toss!

: We would have batted first as well. Decent grass cover on it, but it’s a hard pitch. With the pink ball there will be something for the first 15 overs. This is another opportunity for us to come and execute our skills. The challenge is to adapt quickl to the ball. It travels fast and it’s difficult to control. We are fulfilling a responsibility of debuting with the pink ball. We have the same team from the first Test.

: We will bat first, the wicket is dry and hard, so that’s why we want to bat first. It’s a brave decision we feel. It’s a great opportunity for everyone. Two changes for us.

: Two changes in Bangladesh XI. Al-Amin Hossain and Nayeem are in for Taijul Islam and Mehidy Hasan. India have gone in with an unchanged XI.

Bangladesh have won the toss and will bat first in the #PinkBallTest @Paytm #INDvBAN https://t.co/LCTkWZ6bKM

: Bangladesh skipper Mominul Haque wins the toss and elects to bat first in the historic pink-ball Test at the Eden Gardens.

“It’s a historic moment in Indian cricket and the boys are looking forward to it,” says #TeamIndia Head Coach… https://t.co/Z1DudijpEF

And finally, as we build towards the toss, here’s all you need to know about the day-night Tests and the pink ball. 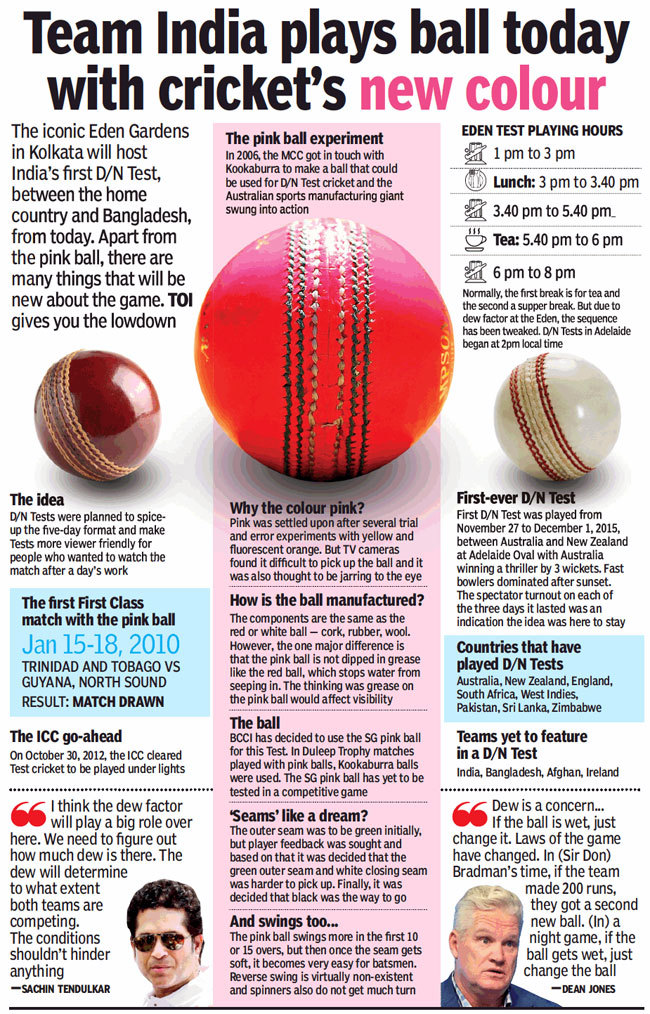 Head to head between the two teams: 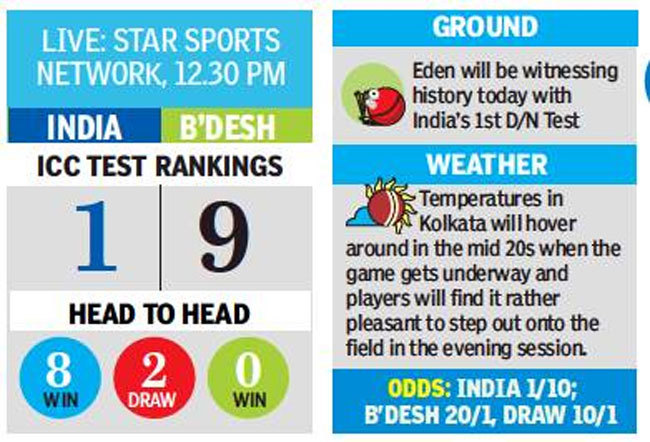 Here’s an appetizer, in the form of things to know, quotes and numbers game. Finally, the ‘pink day’ is upon us. The most talked-about event over the last few weeks in the world of cricket is set to engulf us in pink wraps and a twilight envelope. We at Timesofindia.com welcome you for all the live updates as India’s historic first day-night Test begins at the Eden Gardens in Kolkata against Bangladesh.

‘Daunting, intimidating, exciting’ were words India skipper Virat Kohli used to describe the emotions that could be experienced on Friday, the opening day of the first-ever day-night Test in India. He expects the energy level to be very high in the first hour, and that will make it all the more exciting.

For once, the opponents have been reduced to a footnote in the build-up. Bangladesh will be equally excited, perhaps nervous too. After all, their Prime Minister Sheikh Hasina will be at the stadium, watching them try to salvage some pride after the three-day thrashing at Indore.

India, leading the two-match series 1-0, are on a roll and would be more aggressive. Bangladesh will most probably go into the game with a defensive mindset, keen on lasting for five days. The hosts, though, are overwhelming favourites to win and clinch the series.

For the record, Bangladesh are yet to beat India in Test cricket, having lost 8 matches and drawn 2.